The courageous story of one young man’s fight to survive and his remarkable journey to healing. Told by Solomon himself. 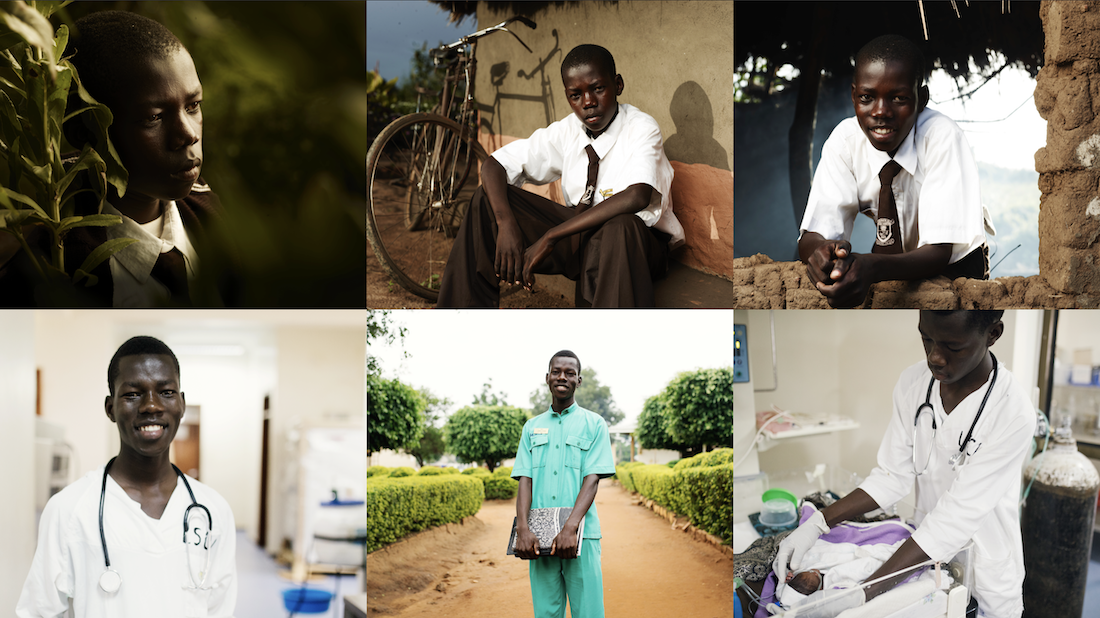 I was 5 years old the first time the rebels took us.

We were hiding and sleeping in the bush [forest] when the rebels found us. Together – with my mother and father – the rebels took us captive and forced us to walk for many days. They tied us together with ropes and we were given heavy loads to carry.

We were forced to move very long distances – so far that my feet had blisters and my legs began swelling. The rebels left me on the way because I was too young and I could not walk very fast. The things were too heavy for me and my legs were in too much pain to walk. So they left me behind. My parents were forced to leave me. If they refused, we would have been killed.

I thank God because someone found me. I cannot remember how – but they were able to return me to my village.

Two years later, I was abducted for the second time.

All of our property was grabbed and looted. The fighters burned and destroyed our home. This time, I had to carry a chicken, bags, and a 10-liter jerrycan of cooking oil.

Then we walked and walked. On our way, we reached a river, where we were supposed to cross and continue with the journey ahead. The commanders instructed everyone to rest for five minutes and then to cross the river. But for me, crossing the river was so difficult – because I was still small. For that, the commander made some soldiers cane me [beat me] with ten strokes.

Later, when we arrived where the rebels had settled, they smeared everyone with unknown oil mixed with ash. They told us the reason was to make us forget about our homes.

The next day, the rebel commander selected seven of us and commanded us to sleep between the dead bodies. It was there that I found my father’s body. I wanted to cry but could not. I feared the commander and what he may do if he saw me cry… because we were instructed not to fear or cry.

The rebels were evil. They practiced witchcraft and magic. They would force us to cut the ear and breasts from people. Even some were made to cook them and eat them while the commanders watched – waiting for anyone to refuse. If you refused, you would be beaten to death.

After some time in the bush,they started training us to fight and kill.

I was later assigned to a commander to take care of his bullets, clothes, and gumboots. Then there was the best day. On this day, I had asked this commander to allow me to go for a “short call” (that is – to relieve myself) and he accepted. When I went behind the bush, I kneeled and called God’s name, asking Him to help me and take me back home – even though I had not thought of home since leaving. And that very day…

Miraculously, God made a way for me to escape!

One week after returning to my home, my mother also returned from captivity. It had been years since we had seen each other. But she was ill and pregnant – almost having the baby before she found home. We praise God, she delivered safely without complications. This is now my youngest sister, Stella.

For years, we faced too many challenges. Many times we had no food to eat. We were without a mattress or a blanket to cover ourselves – which affected our health and growth. We struggled to have enough money which meant we had no school fees. This severely stressed me, affected my education, and led to my dropping out of school in 2010 – because there was no money for school. I was out of school for two years because there was no one to support me.

In 2012, I heard about Exile International through a local NGO in Uganda. The counselors at Exile were good to me. They took me through counseling and later sent me to school. They even provided all the school requirements – my books, pens, pencils, toothpaste, soap, shoes, socks, school uniforms, mattresses, blankets, bedsheets, and school fees. Can you imagine!

Exile International helped me to get my nursing degree!

Today, I am a nurse at a clinic in Uganda, caring for my sisters and brothers, many who are refugees from Southern Sudan. I love serving and helping people become well! Each week, we care for so many.

Can you imagine! From where I began… and now I treat the sick, help with the delivery of babies, and even assist minor surgical procedures. At our clinic, we also care for traffic accidents, burns, domestic violence incidents, and sometimes we care for refugees with bullet wounds.

After working as a nurse for two years, my hope is then to pursue further education and training. I dream of becoming a doctor so that I can serve the community by saving lives and promoting health!

Thank you for your support which makes Solomon’s story possible! He has been on a long journey from brokenness to healing, and we are honored to be a part of that with you. We stand in awe that he is now a healer of others through his work as a nurse! Such redemption! Praise to the Lord, the Healer and Redeemer, for this beautiful story – and praise for His people being a part of it.

Thank you for helping make this possible!

Our Approach  Join us in Healing the Wounds of War