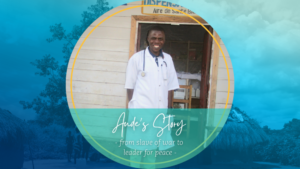 Meet Aude — a brilliant university graduate, pediatric nurse, Biblical counseling master’s candidate, and former child soldier. Though Aude is now pursuing his passions and serving his community through the practice of medicine, his story was not always this peaceful.

In 2005, Aude was captured and enslaved by the rebel group CNDP. After six months of training, he obtained ranking within the military group and was forced to begin countless looting operations that often ended with blood on his hands.

One afternoon, after two years of enslaved misery, a rebel leader asked those who were unhappy and wanted to go home to come forward. Some thought it was a genuine idea, but those who stepped up were killed immediately in front of the entire army.

Aude stood helplessly — watching many of his friends lose their lives in front of his eyes. Deeply traumatized, all Aude could do was pray that God would save him.

His prayers were answered in 2007 when he was rescued by government soldiers and reunified with his community. Four years after his initial capture, Aude was connected to Exile Int’l by God’s grace.

Thanks to partners just like you, Aude received the life-saving trauma counseling and holistic rehabilitation he needed to heal from his wounds of war. The education, leadership training, and discipleship Aude experienced paved the way for his future dreams to become a reality — providing opportunities for him to learn about everything from science to theology in a safe and loving environment.

Since connecting with Exile, Aude’s life has been transformed. He is now a leader for peace in his community — serving others and sharing the love of Christ with war-affected families.

In addition to nursing at a local clinic, Aude is now pursuing a master’s degree in Biblical counseling to further serve survivors of war, helping them heal from emotional trauma in addition to physical illnesses and injuries. Aude recently married a wonderful young Christian woman who is also a nurse!

From slave of war to leader for peace, we praise God for the difference Aude will make in his community and nation for years to come.