‘”An eruption under Lake Kivu could ignite methane gas trapped in the depths of the lake. Such an explosion could destroy parts of Goma and Gisenyi in neighboring Rwanda, according to AP. In addition to methane, Lake Kivu traps huge amounts of carbon dioxide. In 1986, a similar lake — Lake Nyos in Cameroon — released dissolved CO2 into the air after a landslide. The cloud of CO2 asphyxiated an estimated 1,800 people in nearby villages.

Because of Lake Kivu’s size, Sally MacIntyre, a limnologist at the University of California, Santa Barbara, said an eruption in Lake Kivu “would be completely catastrophic.”

An earthquake, like the ones the area has seen since Mount Nyiragongo erupted last Saturday, could trigger a limnic eruption in Kivu, causing the water to release the trapped gases. Dense clouds of CO2 and methane could displace oxygen in the surrounding air and lead to asphyxiation. In high enough concentrations, the methane could also ignite.”‘ [1][2]

All youth from Exile’s programs have been located!

“Please pray for God’s protection over us. Our hearts are broken. We are running down. It feels like we are at the end of the world.”

The need is great. But as our Congo Country Director, Joseph stated: “There is no challenge greater than God.”

100% of your donation will go to volcano relief and needs on the ground. Join us delivering relief and supplies to families who’ve lost everything in the eruption.

Support relief for families, children, and staff impacted by the eruption.

Some families and children we serve have lost their homes and everything they own. Additionally, you will be providing trauma care to the children affected by this disaster.

Earthquakes in the area are increasing, buildings are beginning to collapse, and there is a concern for another eruption. Emergency relief funds are being sent. Would you help? 100% of your donation will support emergency response.

Exile teams are on the frontlines helping those affected, taking in families and children, providing trauma care to youth, and ministering in any way they can. They’re running to disaster… not from it.  #HEROES

“The earthquakes are many today. Food prices are going up and very soon there will be a food shortage because the road has been closed by the lava.

We have families of youth in our Village Programs that have been displaced and homes completely destroyed. Some of them ran away with only the clothes they were wearing and things are getting much much worse.

The staff are welcoming people into their homes – people who ran away after the destruction of their homes. We all have full houses and need help with food and supplies. We expect there will be food shortages in our foster families and we need to help them.

Footage of eruption and aftermath

Early Reporting from Reuters on May 22nd

“Mount Nyiragongo in eastern Democratic Republic of Congo, one of the world’s most active volcanoes, erupted on Saturday, sending panicked residents fleeing.

People grabbed mattresses and other belongings and fled towards the frontier with neighbouring Rwanda as a red glow filled the sky above the city. 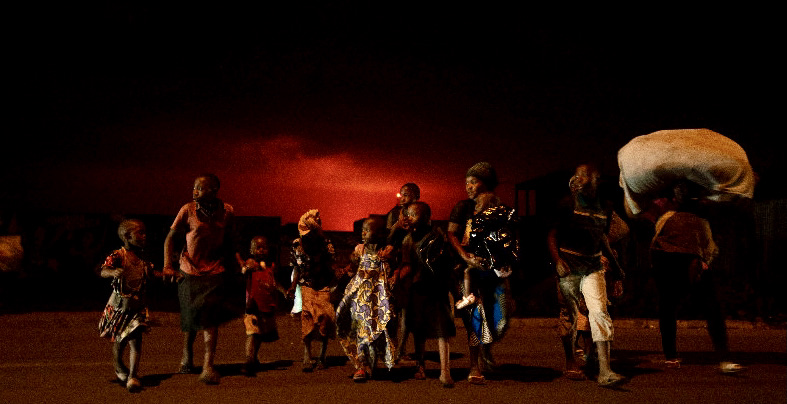 Dario Tedesco, a volcanologist in the lakeside city of around 2 million, told Reuters Goma did not appear to be at risk, and lava appeared to be flowing east in the direction of the Rwandan border. Earlier he had said he thought lava might hit Goma, but he later said this was not the case.

A United Nations source said a reconnaissance flight by a U.N. helicopter appeared to show the lava was not flowing toward Goma or any major population centres

Nyiragongo last erupted in 2002, killing 250 people and making 120,000 people homeless after the lava flowed into Goma

“The local authorities are currently evaluating the situation with the volcanological observatory in Goma … The population is encouraged to remain calm.

Volcano watchers have been worried that the volcanic activity observed in the last five years at Nyiragongo mirrors that in the years preceding eruptions in 1977 and 2002.

*Reporting by Hereward Holland; Writing by Aaron Ross; via Reuters.